Last night I read this on the Book Cosmos by Carl Sagan. It talked about a discovery that simply blew out my mind. I want to share it you.

The discovery that the Earth is a little world was made, as so many important human discoveries were, in the ancient Near East, in a time some humans call the third century B.C., in the greatest metropolis of the age, the Egyptian city of Alexandria. Here there lived a man named Eratosthenes. One of his envious contemporaries called him ‘Beta,’ the second letter of the Greek alphabet, because, he said, Eratosthenes was second best in the world in everything. But it seems clear that in almost everything Eratosthenes was ‘Alpha.’ He was an astronomer, historian, geographer, philosopher, poet, theater critic and mathematician. The titles of the books he wrote range from Astronomy to On Freedom from Pain. He was also the director of the great library of Alexandria, where one day he read in a papyrus book that in the southern frontier outpost of Syene, near the first cataract of the Nile, at noon on June 21 vertical sticks cast no shadows. On the summer solstice, the longest day of the year, as the hours crept toward midday, the shadows of temple columns grew shorter. At noon, they were gone. A reflection of the Sun could then be seen in the water at the bottom of a deep well. The Sun was directly overhead.
It was an observation that someone else might easily have ignored. Sticks, shadows, reflections in wells, the position of the Sun – of what possible importance could such simple everyday matters be? But Eratosthenes was a scientist, and his musings on these commonplaces changed the world; in a way, they made the world. Eratosthenes had the presence of mind to do an experiment, actually to observe whether in Alexandria vertical sticks cast shadows near noon on June 21. And, he discovered, sticks do.
Eratosthenes asked himself how, at the same moment, a stick in Syene could cast no shadow and a stick in Alexandria, far to the north, could cast a pronounced shadow. Consider a map of ancient Egypt with two vertical sticks of equal length, one stuck in Alexandria, the other in Syene. Suppose that, at a certain moment, each stick casts no shadow at all. This is perfectly easy to understand – provided the Earth is flat. The Sun would then be directly overhead. If the two sticks cast shadows of equal length, that also would make sense on a flat Earth: the Sun’s rays would then be inclined at the same angle to the two sticks. But how could it be that at the same instant there was no shadow at Syene and a substantial shadow at Alexandria? 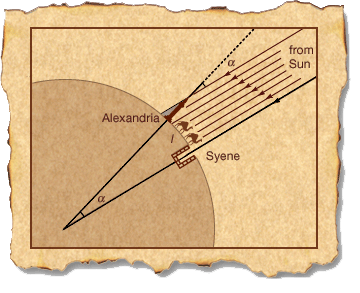 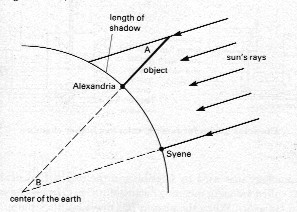 The only possible answer, he saw, was that the surface of the Earth is curved. Not only that: the greater the curvature, the greater the difference in the shadow lengths. The Sun is so far away that its rays are parallel when they reach the Earth. Sticks placed at different angles to the Sun’s rays cast shadows of different lengths. For the observed difference in the shadow lengths, the distance between Alexandria and Syene had to be about seven degrees along the surface of the Earth; that is, if you imagine the sticks extending down to the center of the Earth, they would there intersect at an angle of seven degrees. Seven degrees is something like one-fiftieth of three hundred and sixty degrees, the full circumference of the Earth. Eratosthenes knew that the distance between Alexandria and Syene was approximately 800 kilometers, because he hired a man to pace it out. Eight hundred kilometers times 50 is 40,000 kilometers: so that must be the circumference of the Earth.*
[* Or if you like to measure things in miles, the distance between Alexandria and Syene is about 500 miles, and 500 miles x 50 = 25,000 miles.]


This is the right answer. Eratosthenes’ only tools were sticks, eyes, feet and brains, plus a taste for experiment. With them he deduced the circumference of the Earth with an error of only a few percent, a remarkable achievement for 2,200 years ago. He was the first person accurately to measure the size of a planet.

The Mediterranean world at that time was famous for seafaring. Alexandria was the greatest seaport on the planet. Once you knew the Earth to be a sphere of modest diameter, would you not be tempted to make voyages of exploration, to seek out undiscovered lands, perhaps even to attempt to sail around the planet? Four hundred years before Eratosthenes, Africa had been circumnavigated by a Phoenician fleet in the employ of the Egyptian Pharaoh Necho. They set sail, probably in frail open boats, from the Red Sea, turned down the east coast of Africa up into the Atlantic, returning through the Mediterranean. This epic journey took three years, about as long as a modern Voyager spacecraft takes to fly from Earth to Saturn.
After Eratosthenes’ discovery, many great voyages were attempted by brave and venturesome sailors. Their ships were tiny. They had only rudimentary navigational instruments. They used dead reckoning and followed coastlines as far as they could. In an unknown ocean they could determine their latitude, but not their longitude, by observing, night after night, the position of the constellations with respect to the horizon. The familiar constellations must have been reassuring in the midst of an unexplored ocean. The stars are the friends of explorers, then with seagoing ships on Earth and now with spacefaring ships in the sky. After Eratosthenes, some may have tried, but not until the time of Magellan did anyone succeed in circumnavigating the Earth. What tales of daring and adventure must
earlier have been recounted as sailors and navigators, practical men of the world, gambled their lives on the mathematics of a scientist from Alexandria?

The city was founded by Alexander the Great and constructed by his former bodyguard. Alexander encouraged respect for alien cultures and the open-minded pursuit of knowledge. According to tradition – and it does not much matter whether it really happened – he descended beneath the Red Sea in the world’s first diving bell. He encouraged his generals and soldiers to marry Persian and Indian women. He respected the gods of other nations. He collected exotic lifeforms, including an elephant for Aristotle, his teacher. His city was constructed on a lavish scale, to be the world center of commerce, culture and learning. It was graced with broad avenues thirty meters wide, elegant architecture and statuary, Alexander’s monumental tomb, and an enormous lighthouse, the Pharos, one of the seven wonders of the ancient world.
But the greatest marvel of Alexandria was the library and its associated museum (literally, an institution devoted to the specialties of the Nine Muses). Of that legendary library, the most that survives today is a dank and forgotten cellar of the Serapeum, the library annex, once a temple and later reconsecrated to knowledge. A few moldering shelves may be its only physical remains. Yet this place was once the brain and glory of the greatest city on the planet, the first true research institute in the history of the world. The scholars of the library studied the entire Cosmos. Cosmos is a Greek word for the order of the universe. It is, in a way, the opposite of Chaos. It implies the deep interconnectedness of all things. It conveys awe for the intricate and subtle way in which the universe is put together. Here was a community of scholars, exploring physics, literature, medicine, astronomy, geography, philosophy, mathematics, biology, and engineering. Science and scholarship had come of age. Genius flourished there. The Alexandrian Library is where we humans first collected, seriously and systematically, the knowledge of the world.
In addition to Eratosthenes, there was the astronomer Hiparchus, who mapped the constellations and estimated the brightness of the stars; Euclid, who brilliantly systematized geometry and told his king, struggling over a difficult mathematical problem, ‘There is no royal road to geometry’; Dionysius of Thrace, the man who defined the parts of speech and did for the study of language what Euclid did for geometry; Herophilus, the physiologist who firmly established that the brain rather than the heart is the seat of intelligence; Heron of Alexandria, inventor of gear trains and steam engines and the author of Automata, the first book on robots; Apollonius of Perga, the mathematician who demonstrated the forms of the conic sections* – ellipse, parabola and hyperbola – the curves, as we now know, followed in their orbits by the planets, the comets and the stars; Archimedes, the greatest mechanical genius until Leonardo da Vinci; and the astronomer and geographer Ptolemy, who compiled much of what is today the pseudoscience of astrology: his Earth-centered universe held sway for 1,500 years, a reminder that intellectual capacity is no guarantee against being dead wrong. And among those great men was a great woman, Hypatia, mathematician and astronomer, the last light of the library, whose martyrdom was bound up with the destruction of the library seven centuries after its founding]
[*So called because they can be produced by slicing through a cone at various angles. Eighteen centuries later, the writings of Apollonius on conic sections would be employed by Johannes Kepler in
understanding for the first time the movement of the planets.]


Watch it on iTunes or Hulu, or grab the book from Amazon

“We are a way for the Cosmos to know itself.”
Carl Sagan